30 Mar Too Late To Start? Life Crisis and Late Bloomers

Posted at 10:47h in In the media by laurarodriguez 0 Comments
0 Likes

Does success have a deadline?  And if yes, what is the best age to succeed? Here is a visualization of the relationship between age and success. Tap on the circles below and investigate for yourself. 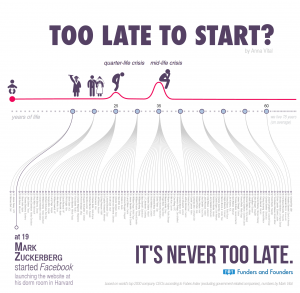 Click on this image to visit the interactive graphic.

So what about those who succeed later in life – the late bloomers. Is it better to be an early achiever or a late bloomer? That’s the same as asking if it is better to start Facebook at 19 or IBM at 61? For the world at large it does not matter. Perhaps Facebook could never happen if IBM did not exist. Should Charles Flint have felt himself a loser when he organized IBM out of a time-card punching technology firm at the ripe age of 61? Those time card punchers turned out to be early prototypes of computers.

Perhaps you have not heard much about Flint, but the device you are looking at right now is possible in part because of what Flint started at 61. He even lived another 24 years, working and enjoying the fruits of his late-in-life success. A later bloomer? Perhaps. Too late for him at 61? Never too late.

Keep on learning on adioma.com